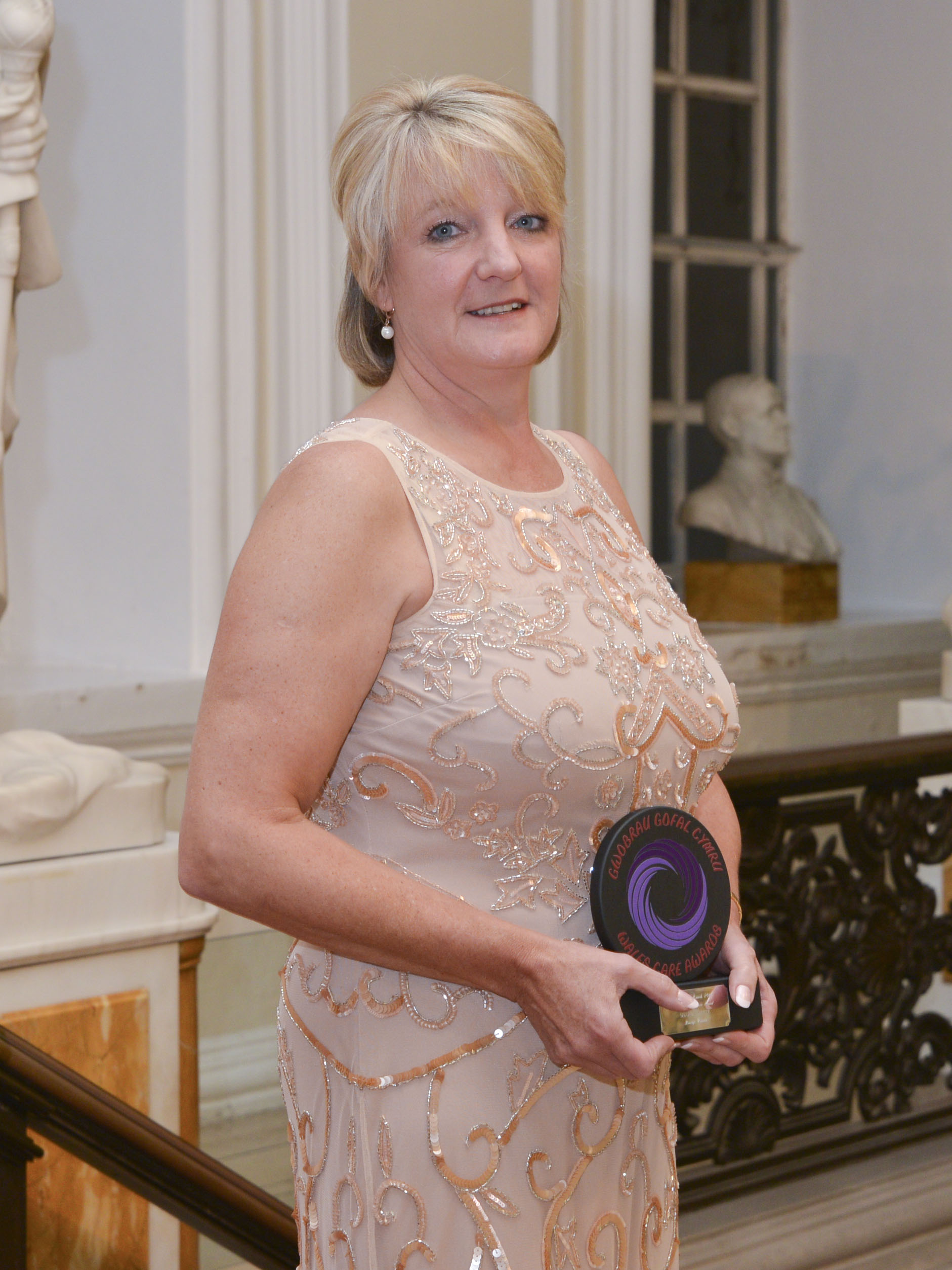 A care home lead nurse who loves to work with elderly people because of the rich memories they can share has been honoured in major national awards.

Sharon White, 53, who lives in Pwllgwaun, Pontypridd, is one of the longest serving staff members at The Hollies Care Home in Pontypridd, Rhondda Cynon Taff which is owned by the Welsh private care home group, SilverCrest.

According to Silvercrest, Sharon is highly respected by residents and colleagues alike for her wealth of experience and strong leadership qualities.

Over the past few years she has been working to ensure the success of special activities to help residents with dementia, including personalised information sheets for each bedroom door to enable them to more easily navigate their way through the home’s corridors.

It is this dedicated approach to her caring role that saw Sharon take bronze in the Outstanding Service category, sponsored by Hallmark Care Homes, in the 2016 Wales Care Awards at City Hall in Cardiff, known as the Oscars of social care.

Sharon is originally from Cardiff and started a pre-nursing course at Rhymney College at the age of 17.

She then completed two years’ nurse training at the University of Wales Hospital in Cardiff before starting work in the stroke unit of the city’s St David’s Hospital.

Sharon said: “When our first child came along in 1986 I took a few months off before starting work again, this time in elderly care, when I became a nurse at Glan Ely Hospital in Cardiff.

“It was while I was there that I realised I wanted to work with older people. I think that’s mainly because they still have lots of living to do and want to be part of things. I help them to do that wherever I can.”

After a couple of years at Glan Ely, her husband’s job in sales meant a move for the family to an area just outside Looe in Cornwall.

During the 10 years they were there Sharon split her time between having her other two children and working as a nurse, mainly on night duty, at two local nursing homes.

In 1997 the Whites moved back to South Wales where Sharon began at The Hollies soon after it opened.

She said: “It’s a 41-bed home and a number of residents have dementia. As lead nurse I stay busy because there are other health problems such as Parkinson’s Disease and diabetes.

“I’m in charge of a team of six nurses but I’m not an office person and like to be down on the nursing floor as much as possible.

“I also enjoy being involved in staff training and development. We have quite a few of the carers who aim to become nurses and I’m happy to say I’ve helped a number of them achieve this ambition, some of who have come back here to work after qualifying.

“I also work with our lifestyles and administrative teams on special activities for the residents with dementia like the Butterfly project which encourages them to bring in familiar things from home.

“We’ve also been creating personalised information sheets which are attached to the doors so that it’s easier for people to find their bedrooms. One gentleman used to be a footballer so, along with his name, he has pictures of footballers on his door.

“We also organise special activities to make The Hollies feel more like a home from home, including baking and cookery days and trips out.

“I lost my own mum and dad some years ago so I think it’s great to have people in their eighties and nineties living with us.

“When you talk to them they have some great memories and stories to tell, and that’s one of my favourite things about the job.

“Actually, I love everything about it – the team and the residents.”

Dr Bikam Choudhary, Chief Executive of the SilverCrest Group said “We are enormously proud of Sharon. We recognise her long service with us and she really is part of the SilverCrest family making a huge impact on the residents and her colleagues.”