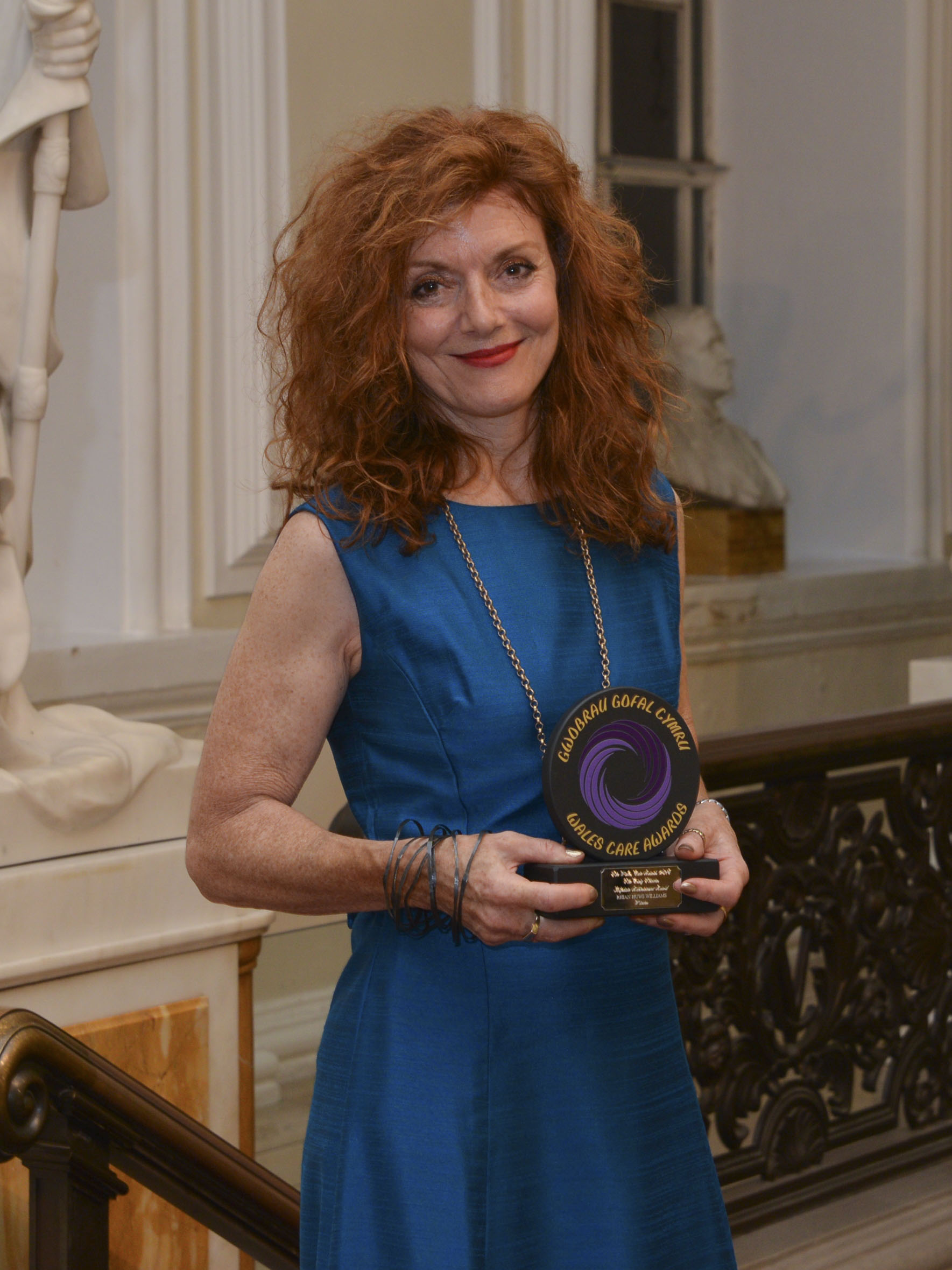 An “inspirational figure” to social care in Wales has been honoured for her many years of dedicated service..

Rhian Huws Williams, who has retired after 15 years as the first chief executive of the Care Council for Wales last June, was presented with The Craig Thomas Lifetime Achievement Award at the 2016 Wales Care Awards, known as the Oscars of social care.

Rhian, who comes from Llannefydd near Denbigh, was a social worker and trainer before going on in 2001 to oversee the formation and then head up the Care Council, which independently regulates and develops the professional education and training of Wales’s social care workforce.

She played a leading role in devising its key policies and strategies and also sat on a number of influential government bodies in Wales and beyond.

The Wales Care Awards, now in their 14th year, are in association with Care Forum Wales, a not-for-profit organisation set up to give independent care providers a single professional voice with which to speak on one of the most important issues of our time – how to provide better quality care for those who need it most.

The Craig Thomas Lifetime Achievement Award is in the special gift of judges. In memory of a former leading council member of Care Forum Wales, it is presented to someone who has made an outstanding contribution to the social care sector.

Rhian, 58, was educated at Ysgol Glan Clwyd before studying at the University College of North Wales, Bangor, between 1976 and 1979 and returned there for a Master’s Degree in social work.

From 1988 she was a social worker with the former Clwyd County Council before taking her first UK-wide job with the Central Council for Education and Training in Social Work.

After being appointed chief executive of the Care Council she led the way in investing in a sustainable, qualified and secure workforce for social care services. She also played a key role in developing the workforce into a bilingual one.

Under her direction the Care Council was amongst the most innovative in setting robust conditions in relation to bilingual and Welsh-medium education as part of validating university courses.

Rhian has been a member of a number of influential government advisory bodies, including the Ministerial Review on Welsh for Adults and the Independent Commission on Social Services.

She chaired the Implementation Group on Welsh Language Strategy for Health and Social Care, `More Than Just Words’, and was a council member of City & Guilds.

In April next year, the care Council for Wales, which she established and guided through its crucial early years, is due to be superseded by the new body Social Care Wales.

Rhian, who has lived in Cardiff for many years, said that following her retirement in the summer she was now taking a break before becoming a public service consultant and adviser.

Of winning the coveted lifetime achievement award she said: “My passion has always been to raise the profile and the status of the social care sector and its workforce.

“I was totally surprised but very honoured to receive it at such an important event in the calendar which is all about care workers.

“I knew Craig Thomas in whose name the award is made and how much he himself did to raise the profile and drive forward high quality in the sector.

“I’m humbled to have been presented with it in a roomful of people doing one of the most important jobs in social services working with those who need care and dignity.”

Mario Kreft MBE said: “Rhian is an inspirational figure in the social care sector in Wales.

“She’s led the Care Council and the sector through some of the most of the significant changes in a generation.

“The award is hugely deserved and recognises her invaluable contribution to the sector in Wales and also internationally.”