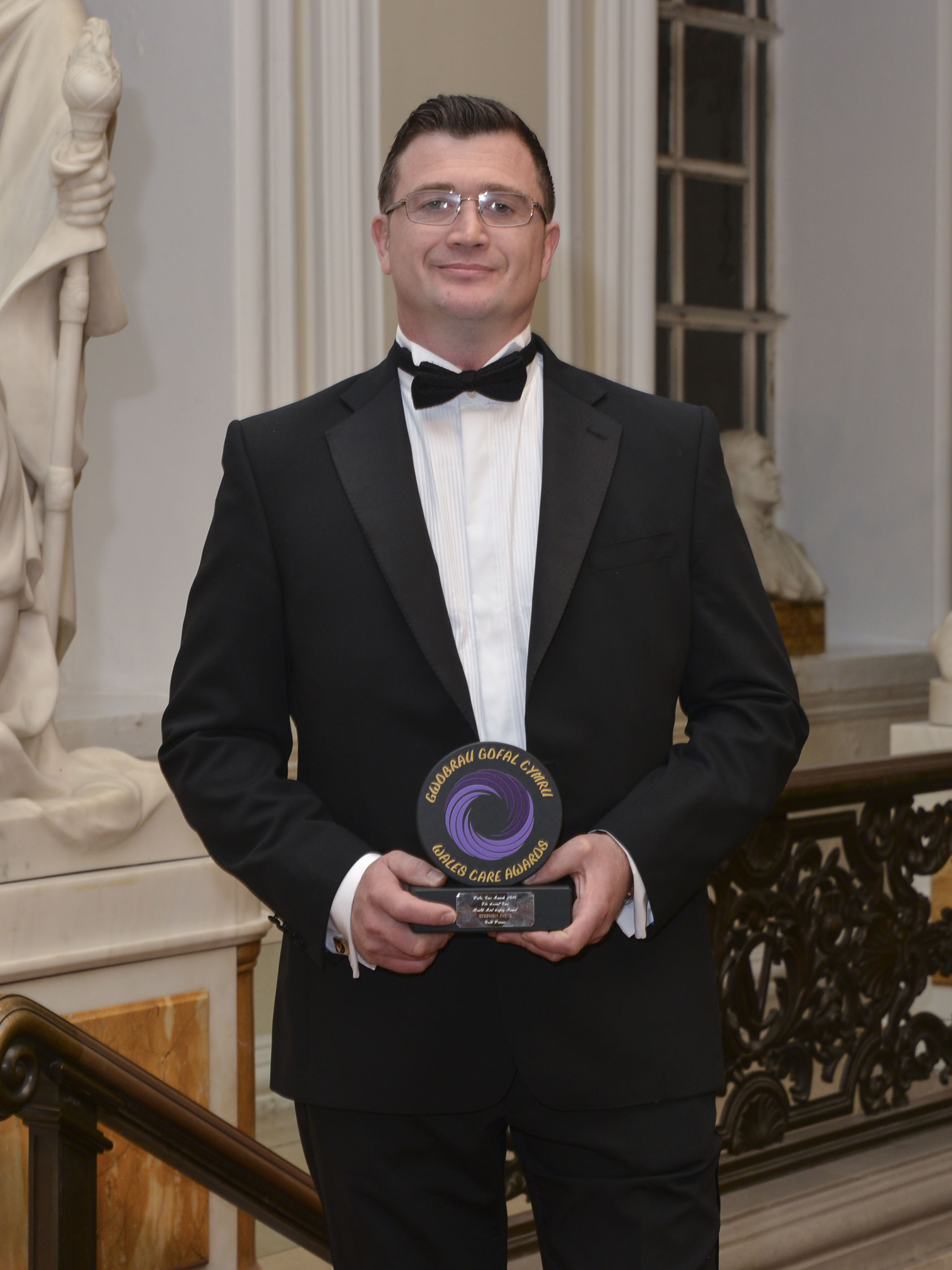 A new dad who works “round the clock” for the benefit of the elderly residents where he works is celebrating national awards glory.

Stephen Ivins, a maintenance and health and safety officer at The Romilly Nursing Home in Pontcanna, Cardiff, scooped a coveted gold award in the Social Care Health and Safety Award category in the Wales Care Awards 2016.

The 42-year-old, from Barry, Vale of Glamorgan, received his trophy at a glittering ceremony at City Hall in Cardiff.

The prestigious national awards, run by Care Forum Wales, acknowledge the hard work and exceptional performances of those in the care sector and are widely regarded as the ‘Oscars’ of the care industry.

Stephen, a former Ely Rangers footballer, said: “I was really nervous and excited at the same time. Winning gold is absolutely brilliant but I wouldn’t have been disappointed with silver or bronze.

“I’m very proud and chuffed to have won. My phone has been constantly out since coming back to the home as all the residents want to see the photos from the night.

“It’s nice for them to be able to share in the success. Everyone has been asking to see the trophy.

“It was a brilliant night and there were some real tear jerking moments in the stories that were told. It was an amazing experience.”

Stephen, who has been in his current role for the past eight years, works around the clock to ensure his residents have the best living environment possible – including personalising the décor of their bedrooms to create a home from home.

The health and safety worker, who is often called out of his bed in the middle of the night to fix unforeseen maintenance problems, has had a few more interrupted nights since the birth of his son Brodie Ivins, 16 months ago, but admits he wouldn’t change his job for the world.

His ‘uncomplaining’ approach to his work and his effort to get to know the people he works with to find out what makes them happy has made him a hit with staff and residents. His colleagues are convinced he has a ‘magic cupboard’ full of homely ornaments and interior flourishes to create whatever bedroom environment his residents need.

“When you decorate the rooms and put all the things they find nice and comforting and personal, it’s very rewarding,” said Stephen, who is responsible for all aspects of site management including health and safety, maintenance and fire safety

“It’s the small things that make them happy. I’ve gone to get personal watches fixed, take blood samples to the surgery, you name it. It’s quite a wide ranging job.”

Stephen, who lives with his partner Gemma and attended Bishop of Llandaff School in Cardiff, admits the only time he is unpopular with the residents is when he has to test the fire drill.

“They all love me for that,” he joked.

“We have to test the horizontal and vertical evacuation procedures which involve getting people down the stairs on sledges.

“I’ve had call outs myself at 3am and I’m kept rather busy. The last time it happened, my son luckily stayed asleep. I’ve had other phone calls where I’ve woken the whole house up but luckily my partner is very good and understanding.

“All the residents and staff know me as ‘Bob’ and have me on speed dial from the doctors to the managers. My phone goes about 100 times a day and you have to prioritise the work but I usually get there.”

Stephen, who used to manage youth football teams for Cardiff Hibernian FC, as well as play in the adult team, was accompanied to the awards ceremony by his partner Gemma.

In nominating Stephen for his award, Kate Stephens, registered manager of the home, said: “Steve works tirelessly to ensure the health and safety of residents, staff and visitors to the home is at the forefront of their daily lives, often working additional hours without complaining and always with a smile.

“I have nominated Steve Ivins as without him I feel that The Romilly Nursing Home would be a different place.”