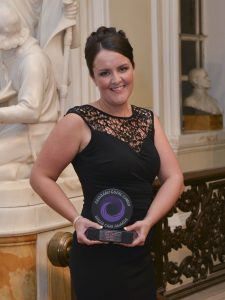 An Aberdare care home deputy manager described as ‘a real champion’ by her bosses has been rewarded with a gleaming silver accolade for her years of dedication to her patients.

Zowie Evans was presented with the top honour at the 2016 Wales Care Awards held at Cardiff City Hall, where she had been nominated in the category for Excellence in Dementia Care.

The awards, run each year by Care Forum Wales, are considered the health care Oscars as they honour men and women delivering the highest standards of professionalism in their field. END_OF_DOCUMENT_TOKEN_TO_BE_REPLACED