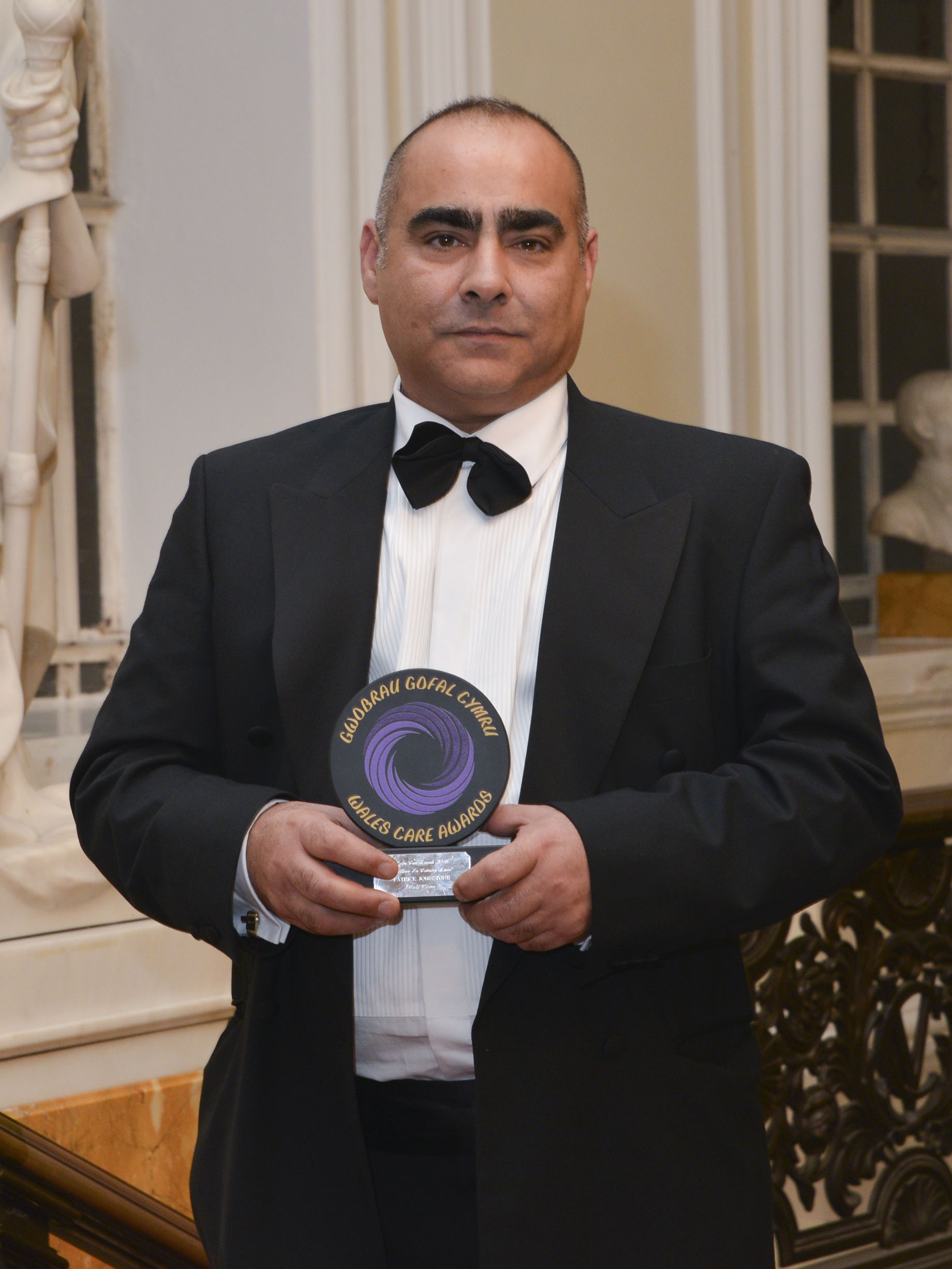 He was presented with his award in front of an audience of his peers from across the country who sat down to a celebratory dinner. The MC for the evening was Welsh tenor and opera singer Wynne Evans, aka Gio Compario from television’s Gocompare.com advertising campaign.

Patrick, 47, who lives in Newport with his wife Sharan and sons, Harrison, 16, and Joseph, 11, was nominated to receive an award by his bosses at Ty Enfys Care Home, Pentwyn, which he joined six years ago, becoming head chef in 2013. He was delighted that a number of his work colleagues were also there on the big night to see him presented with his Gold award.

The Wales Care Awards, run by Care Forum Wales, are considered the Oscars of social care due to the way they honour men and women delivering the highest standards of professionalism in their field.

Patrick attained Gold in the Excellence in Catering category.

Commenting on the achievement he later paid tribute to the organisers of the annual awards night itself, saying the event is a credit to the calibre of care workers across Wales.

He said: “It was a great honour just to be there on the night to be honest, to meet so many deserving nominees and to witness the quality of social care we provide here in Wales being truly celebrated.

“It is one of the most positive events I have had the pleasure to attend and something of which Wales can be truly proud.”

His words were reflected by the Chair of Care Forum Wales, Mario Keft, who said the standard of entries at this year’s Wales Care Awards was among the highest ever.

He said: “This awards ceremony is our opportunity to pay tribute and to celebrate the talent and commitment that is improving the quality of life for thousands and thousands of people throughout Wales.”

Congratulating him on his Gold achievement Mr Kreft said Patrick was among a number of deserving champions, adding: “There are only winners here tonight so it is only fitting that the finalists will receive a gold, silver or bronze Wales Care Award.

Before going into social care catering Patrick worked in some of the top hotels of South Wales including St Mellons Hotel and Country Club, Cardiff, Cwrt Bleddyn, Llangybi, and The Manor Hotel near Crickhowell.

Earlier in his career he won a competition where the prize was the chance to cook with James Martin, of TV’s Saturday Kitchen. He has also enjoyed masterclasses with top chef, restaurateur and cookery author Gary Rhodes, and with world famous American chef Ken Hom.

But Patrick says being chef at Ty Enfys Care Home is the most rewarding job he has ever had. He enjoys chatting with the home’s residents about the sort of foods they like and he relishes the challenge of cooking up a varied menu of nutritional meals for them every day of the year.

In her submission nominating him for an award, Ty Enfys Care Home manager, Sujjata Singh, said Patrick and his team deliver an exceptionally high standard of catering.

She added: “It is not an easy task in a 101 bed home which caters for elderly care, and with dietary requirements which are varied and often complex. But Patrick works closely with the care and nursing teams ensuring residents needs are met. He also produces amazing buffets for residents’ birthdays and any event that the home hosts.”