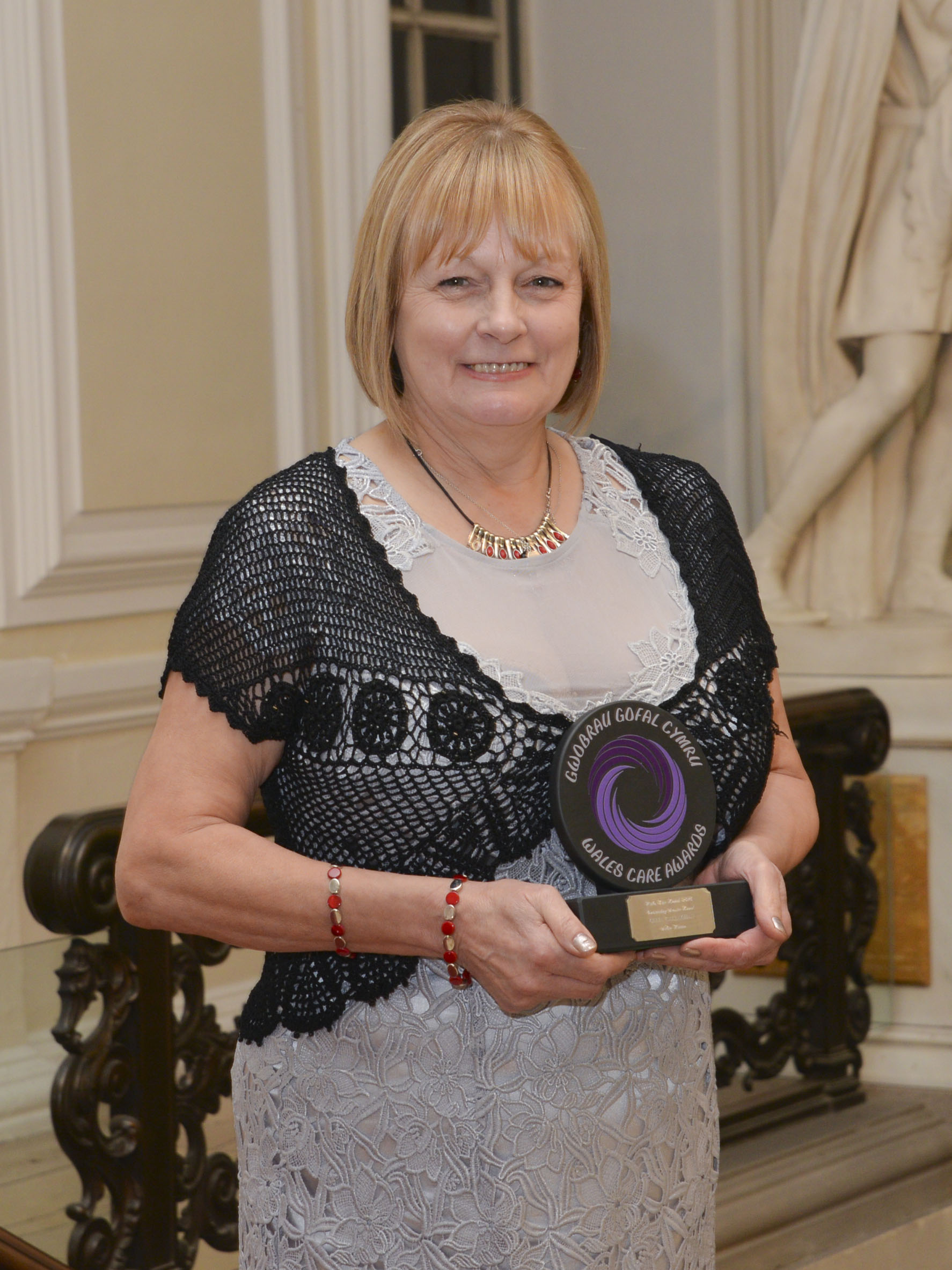 A highly experienced carer who loves her job so much that she came out of retirement to look after vulnerable adults has struck silver in major national awards.

Celia Callaghan had only been at home for two weeks when she realised she missed the life so much she had to return to work. And at the age of 61 she became a support and rehabilitation practitioner at a residential care home run by Integra Community Living Options in Rhonda Cynon Taf.

Away from work Celia, who lives at Gilfach Goch near Tonyrefail, also finds time to help care for her daughter who suffers from mental health problems and her grand-daughter who has a physical disablility.

It is this amazing dedication and commitment that has seen Celia take silver in the Outstanding Service category, sponsored by Hallmark Care Homes, of the 2016 Wales Care Awards, known as the social care Oscars.

Celia is originally from Pontyclun near Llantrisant. She started work in a local factory when she left school but soon decided it was caring that she really wanted to do.

She said: “I’d not long lost my mum at the age of 41. She had worked in a local hospital and when she died a friend of hers suggested that I try the same type of work.

“So when I was 16 I began as a cadet nurse at the Hensol NHS hospital near my home working with people with mental health problems.

“I later became a nursing assistant at the same hospital and was there until it closed in 2003.

“From there I went to another NHS unit in Tonyrefail looking after people with challenging behaviour living in specially adapted accommodation.

“I retired from there last year when I reached 60 but after only  two weeks at home I missed the life so much I decided I wanted to start work again because I wasn’t ready to retire.”

That’s when Celia landed her present job at Integra’s Ty Nant residential care home at Thomastown in RCT, which is for men aged over 18 who benefit from time-limited support, often following discharge from hospital, to help them adjust successfully to living in the community.

Celia explained: “Ty Nant has three adjacent houses and two flats which are fully equipped to give the residents everything they need to adapt to independent everyday living.

“They need support in their activities of daily living such as cooking, cleaning and generally looking after themselves properly. We help them to increase their independence and focus on achieving goals meaningful to each individual.

“Ty Nant has had lots of successes with clients moving on and whenever we do it gives you a good feeling and lots of job satisfaction, so I’m really glad I decided to go back to work.”

Celia, who is divorced, has two children, 38-year-old Simon who also works for Integra as a senior care practitioner, and a daughter, Lisa, 43, who suffers from mental health problems.

Although Lisa is able to live on her own, Celia gives her lots of help and support at times when she needs it.

She has also helps to care for her grand-daughter – Simon’s daughter – who suffers from a debilitating skin condition, taking her to regular hospital appointments and looking after her during holiday periods.

Celia said: “Caring for people is what I’ve done all my life and is just second nature to me. My late stepmother suffered from dementia so I helped my dad with her, cooking meals for them and doing the shopping.”

In her award nomination a senior colleague praises Celia for her “commitment, compassion and unwavering dedication”, adding that she is “never anything other than happy, pleasant and always a joy to work with.”