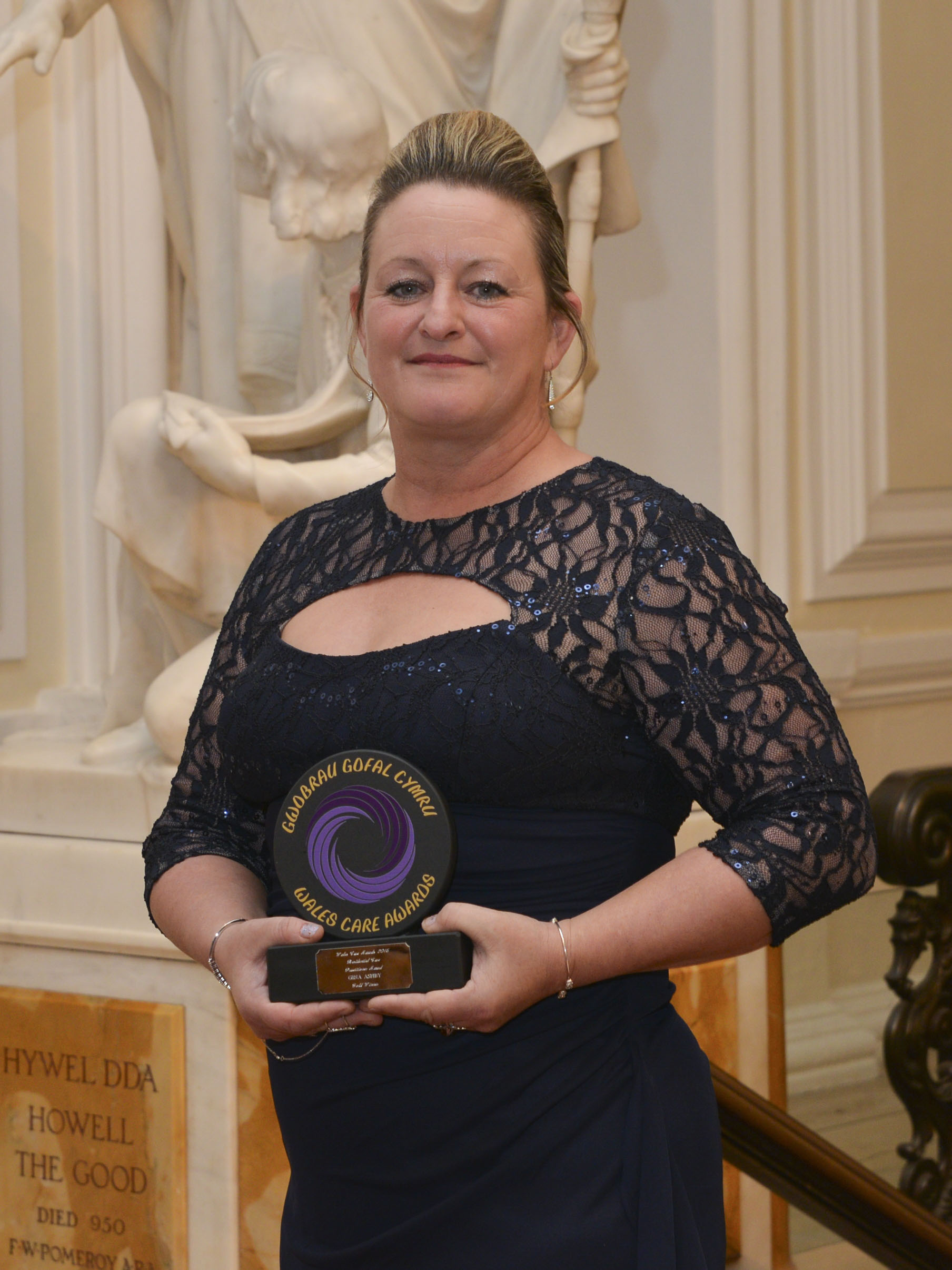 A care worker who leads by example has captured a prestigious gold award.

Gina Ashby from Guilsfield was among the top prizewinners at this year’s Wales Care Awards, known as the social care Oscars. The ceremony took place at City Hall, Cardiff, and the MC for the evening was opera singer Wynne Evans, also known as Compario from the TV adverts for Go Compare.

The awards are organised by Care Forum Wales to recognise good practice in the care sector and Gina, who is a care assistant at the Rhallt Care Home in Welshpool, won gold in the category for Residential Care Practitioner.

“It was a lovely evening and all the nominees were great,” she said.

Originally from Llanfaircaereinion, Gina has worked with young and old residents in various local care homes for 20 years, moving to The Rhallt three years ago. She works in the Memory Lane Community, which accommodates 42 people with advanced dementia.

“I had been interested in dementia care for a while and so was glad when this job became available,” she said.

Gina was nominated for the award by Nick Oulton, the home’s general manager, who said that from day one she showed a natural empathy and understanding of the needs of those in her care.

“Always cheerful and upbeat, she gives 100% of herself at all times,” he said.

She leads by example and is never afraid to speak out on behalf of the residents, and has undertaken a number of courses to broaden her knowledge in the field.

“Many of the younger care staff go to her with their problems, and no matter what her difficulties are she will always find time for them,” said Nick.

“She can even get the most reluctant resident to eat and the most challenging residents to bathe and dress with what seems to be little effort.”

Gina, 44, demonstrated her care and compassion in a different way recently when a colleague was taken seriously ill.

The woman, who is Hungarian and has no relatives in this country, was on a life support machine in hospital and although Gina hardly knew her she took it upon herself to befriend her.

She visited her colleague regularly in hospital, liaising with her brother in Hungary and even cared for her beloved cat, even though that involved a 19-mile round trip to ensure it was fed and watered.

In addition, she liaised with the medical team and supported the woman in her recovery when she returned home. She has since returned to work at The Rallt, alongside her new best friend.

Gina said she derived great personal and professional satisfaction from the sometimes small progress made by the residents.

She was accompanied to the prizegiving ceremony by her son Jack, 16, who enjoyed the chance to wear a tuxedo.

“I know not everyone can do the work but it really pleases me to know that I can sometimes make a difference to their lives and it was lovely to have one’s work recognised,” said Gina.

When she is not at work she enjoys nothing more than walking her two dogs, a Jack Russell and an Australian collie.