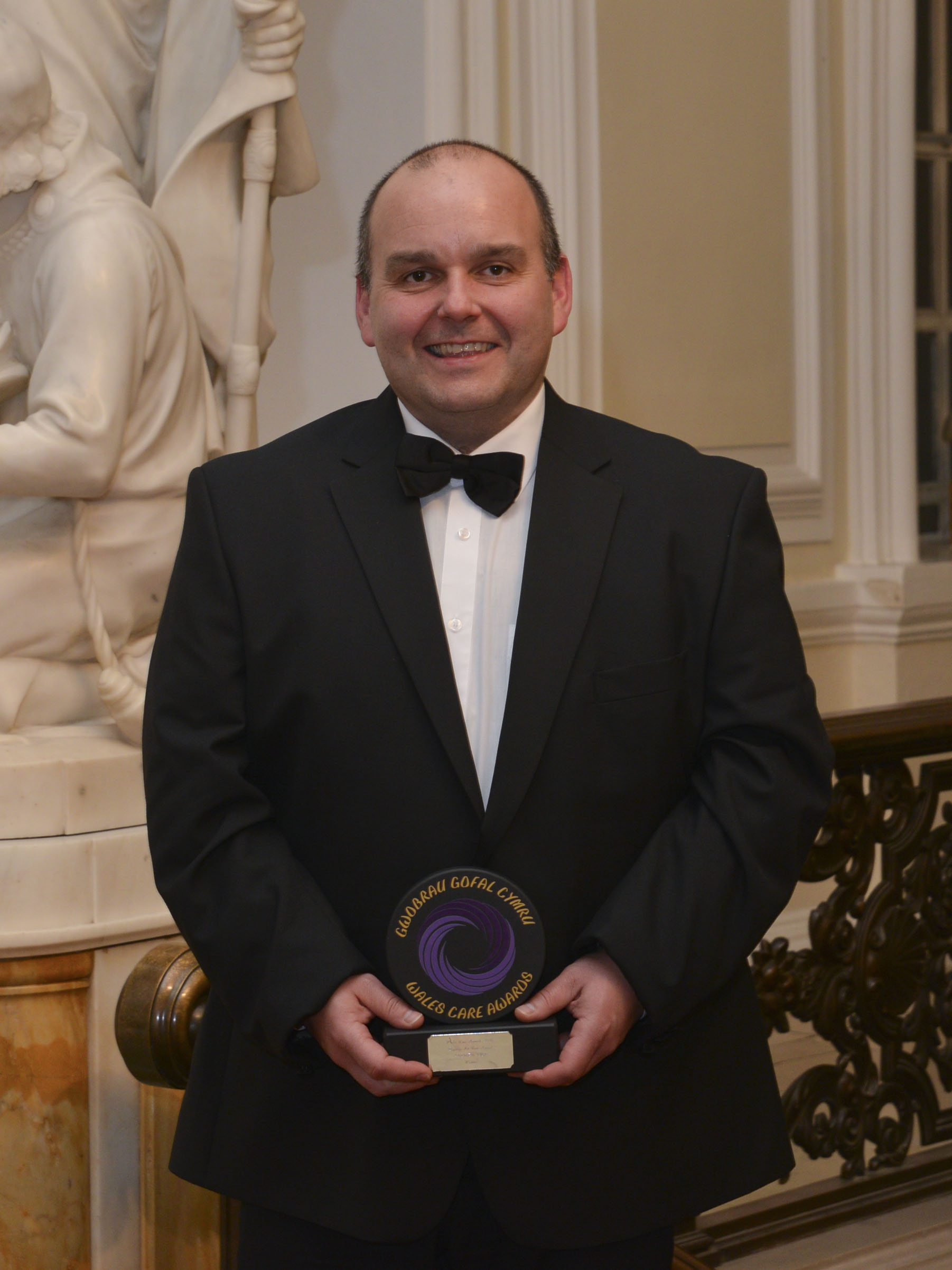 A pioneering care manager is celebrating an awards double. Andrew Guy, 42, has played a major role in developing a new approach to providing people in Caernarfon with learning disabilities with more fulfilling lives.

It is his dedicated approach to his caring that first saw him strike silver in the Excellence in Learning Disability and Mental Health category, sponsored by Carewatch/Pineshield, in the 2016 Wales Care Awards, known as the social care Oscars, at City Hall in Cardiff,

He then went on to win a coveted Dignity in Care Award, sponsored by the Welsh Government, a special honour presented to a person who has demonstrated compassion and real understanding for the needs of others.

Andrew, who lives in Caernarfon, has played a key role in putting in place a new system of active support which has broadened the horizons of people with complex needs and seen them taking on work placements and becoming involved in a range of leisure activities.

The methods adopted in Caernarfon have been so successful in the past three years that Andrew has just taken on an important new job training fellow managers and staff at Gwynedd Council to adopt them in other areas of the county and has even helped spread the word abroad.

Originally from Llanberis, his first job after leaving school in Caernarfon was working in the café of the area’s famous mountain railway. A couple of years later his career took a very different route when he joined the local authority as a care worker at the former Segontium day centre in Caernarfon looking after people with learning disabilities, some with complex needs.

He stayed with Gwynedd Council to become a support worker at another, similar day centre in Caernarfon which is part of the Arfon Community Link and eventually became its manager. It was in this job that, with the strong support of his senior line manager Selwyn Lloyd Jones, Learning Disability County Manager, that he began to modernise the way the service for people with learning disabilities is delivered.

​Andrew said: “About three years ago we got to the stage where we saw that things had to change, so we set about campaigning to alter attitudes towards people on the more complex side of learning disability.

“From the British Institute of Learning Disabilities we’ve learned about all sorts of positive approaches and activities which help people to learn new skills.

“At Arfon Community Link we now focus on people’s competencies and abilities, such as arranging for them to have regular periods of work experience in places like local supermarkets, museums, charity shops and a food bank.

“This definitely helps to broaden their horizons and shows that no matter what the level of disability people can still contribute something to the community.

“Apart from work, there’s also the leisure side of things and we arrange for people to take part in activities ranging from swimming to gardening.

“But the important thing is that they only do what they actually feel like doing and always have our active support.

“We’ve seen that this new approach has led to a decline in people’s negative behaviour and that they have a better quality of life.

“A good example of this is a gentleman who left special needs school and was placed in a day centre out of town. This was deemed as a `failure’ but today he has one-to-one support and had the opportunity to have day work in a leisure centre.

“Because he wears a uniform he feels part of something and has no behaviours that cause concern. His grandmother had tears in her eyes when she saw a video of him cleaning and helping out at the centre because she was so proud.”

Active Support has up to now only been adopted for about 26 people in Caernarfon but Andrew was recently appointed as a senior training facilitator responsible for showing other managers and staff from across Gwynedd how it operates. A film he produced about it has been shown at seminars in various areas of the UK and also in the Spanish city of Barcelona.

In nominating him for the Wales Care Award Andrew’s senior colleague, Selwyn Lloyd Jones, described him as “exceptional in his field” and “the mainstay and backbone of the whole service.”

Andrew said of his double-success in the awards: “It was first announced that I’d won the silver award, which made me so thrilled that I dashed outside the room to phone my Mum and my sister who both live in Llanberis.

“Then when I came back in the room I heard them calling out my name for also having won the Dignity in Care Award.

“I said to myself, `oh my God, I’ve won another’, and went right back outside to call my family again to tell them about it.

“It was a night of double celebration for me and I felt like a member of royalty.

“I really appreciate both awards which are not just for me but are also recognition for members of the team I work with who share the same mission as I do.”