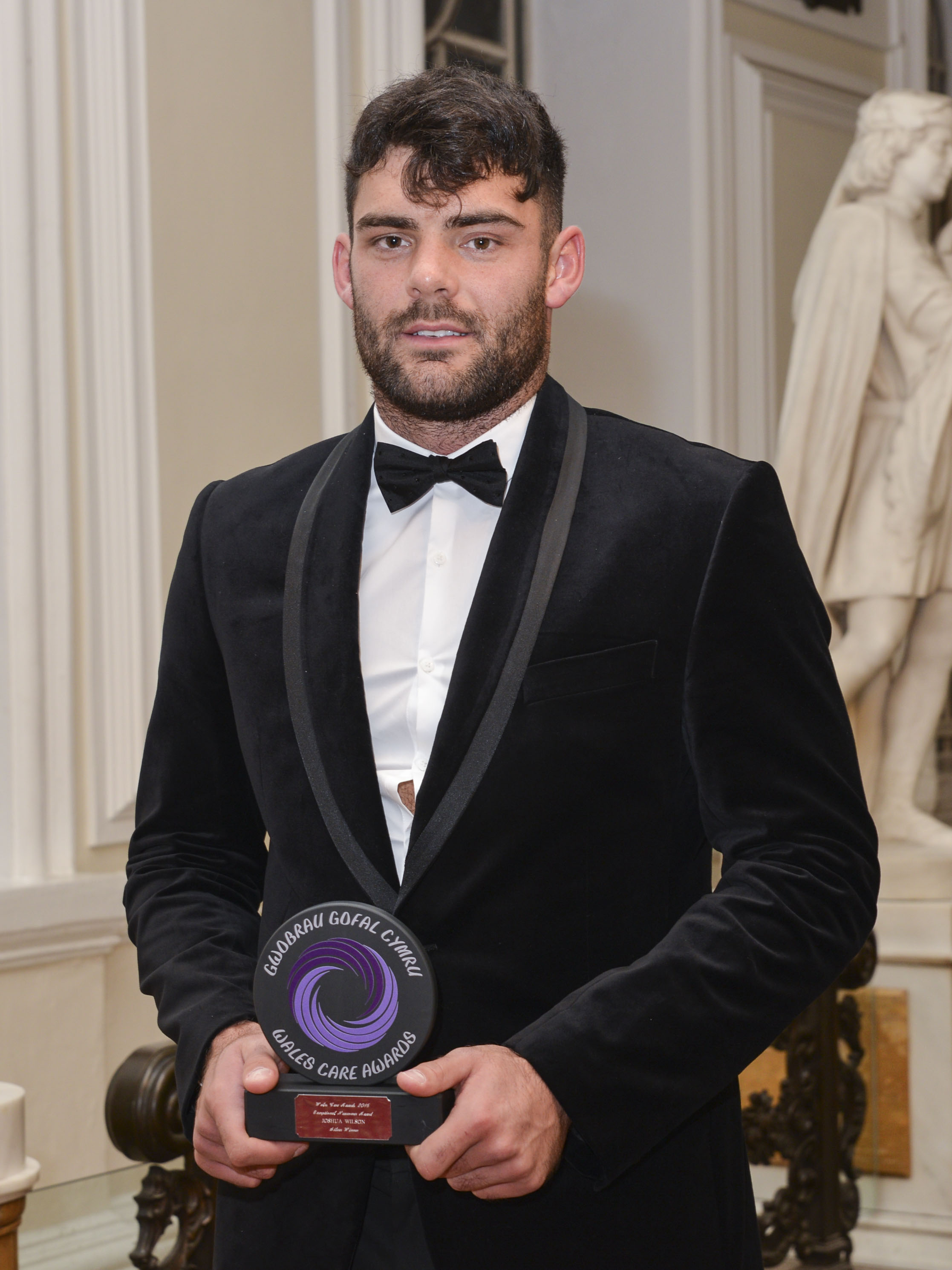 A rugby-playing dad who devotes his time to help turn around the lives of young people in a children’s home has been presented with a top care award.

The keen sportsman has been described as a role model for the youngsters he supports at a specialist therapeutic children’s home in Ruthin by encouraging them to strive for the best and keep active through sport.

The home is a six-bedroom unit for young boys aged 11-18 with complex behavioural and emotional difficulties who are given intense support to help them succeed in education and employment.

Josh, who is employed by Branas Isaf and formerly taught swimming to children aged three to 12 at Corwen Leisure Centre, collected his silver award at a glittering ceremony at City Hall in Cardiff on Friday 21st October 2016.

The awards acknowledge the hard work and exceptional performances of those in the care sector.

“I feel like I’m putting something back and making a difference. When I come back from work I feel happy, it’s very rewarding,” said Josh, who combines his challenging role as a support worker two days a week with his responsibilities at the family business, Ty Canol Caravan Park in Llangollen.

“My family are proud and my mum is especially proud.

“When you drive home at the end of the day you always think about what you’ve done with the kids and what I would’ve liked to have done better.

“I love working there. The whole team is brilliant and my manager has done a lot for me. I’ve come a long way since joining the team.

“I’d never worked in care before. I was in the deep end quite quickly but I wouldn’t have had it any other way as it meant I learnt very quickly.”

Josh, who also worked in Corwen and Llangollen Leisure Centres as a fitness instructor after leaving school, plays competitive rugby for Chester Rugby Club, which is in North Division 2, has a talent for communicating with children and inspiring them to succeed.

The new dad, whose daughter Azaia Wilson, was born a year ago, has already won the national and regional Newcomer of the Year title in the Caretech Awards in November.

Josh, who attended Ysgol Dinas Brân, said the most satisfying aspect of his job was watching the youngsters’ progress and reform their behaviour through sport and other goal-driven work. The home has even created a squash league to build their self-confidence.

One of his most notable achievements was seeing a young boy for whom he was a key worker move on from the home and flourish.

“I feel like I’m a role model to them. I always tell them what the score was in the rugby. I’m trying to inspire them and keep them active by encouraging them to the gym,” said Josh, who is in the completion stages of his QCF Level 3 in Caring For Children and Young People.

“I’ve recently had a child myself and it’s put a different perspective on things. I’m much more empathetic.

“You have your bad days but I’m level-headed and can deal with most things thrown at me. You want to see the lads do well.

“I would like to continue working with young people in the future. I play rugby and I look after myself and the kids look up to me. I try to work on their self-confidence and you develop a bond.”

Nominating Josh for his award, registered manager Leanne Bennett said: “Josh is a very well-liked and respected member of the team at Pant Glas and nothing is ever too much trouble for Josh. He is eager and enthusiastic in his role and works exceptionally well both lone working and in a team.

“He has a good morale which impacts on others and his can do attitude is infectious to his colleagues. Josh is an asset to our team and I feel he has a brilliant career ahead of him.”