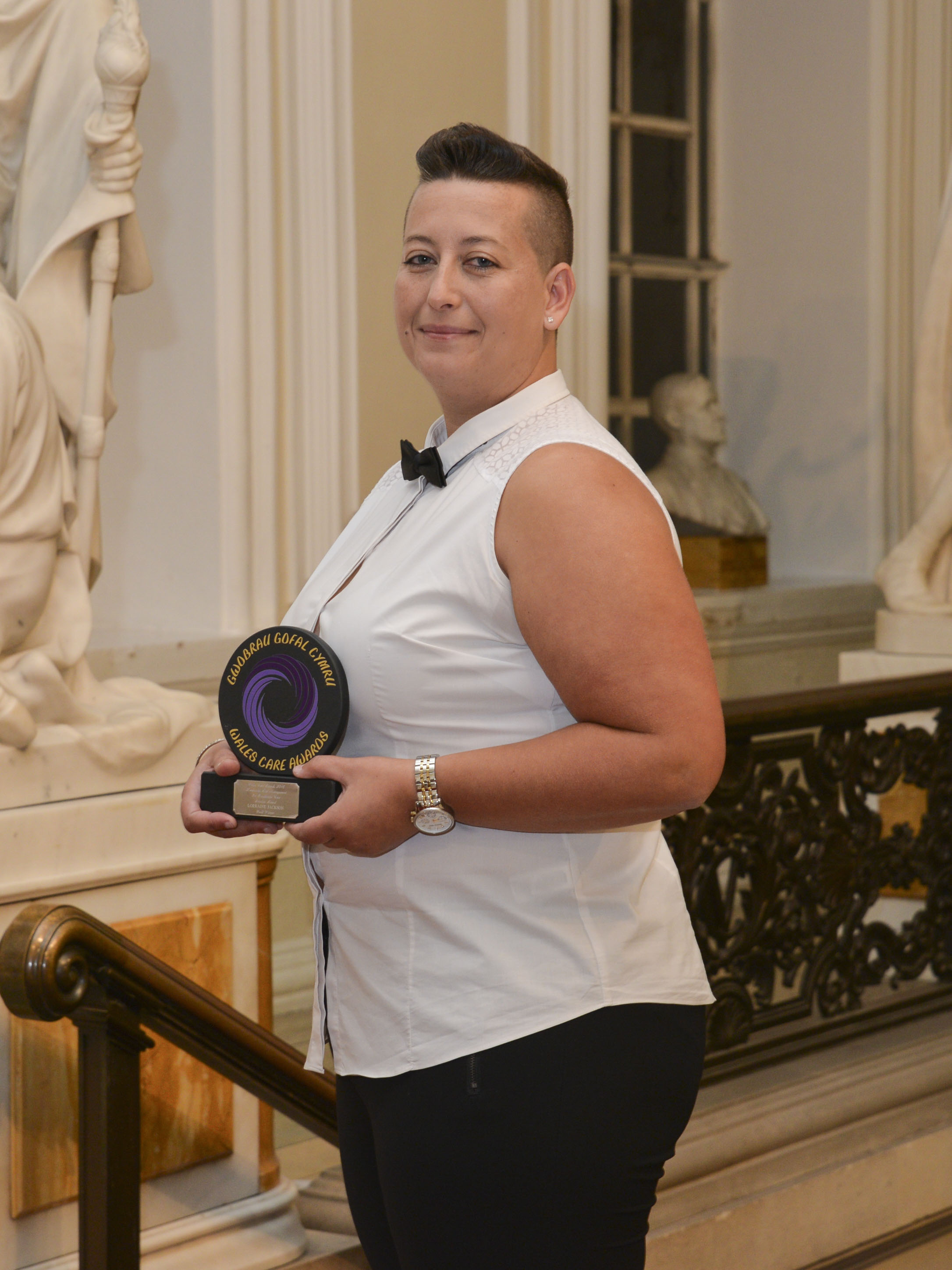 A kickboxing care home manager was left floored when she received a prestigious award..

The awards are organised by Care Forum Wales to reward outstanding work in the care sector and Lorraine was shortlisted in the category for Leadership in Residential Care Services.

The prize giving ceremony was held at City Hall, Cardiff, and the MC for the evening was opera singer and radio presenter Wynne Evans, aka Gio Compario from the TV adverts for Go Compare.

Lorraine, now 36, who lives in Tynewydd, Whitchurch, Cardiff, has worked in the caring profession since she was 17 and in the learning disability sector for the past 11 years.  She has been the manager at Ty Hendy, which is owned by Consensus Support, since August, 2015.

She was nominated for the award by Simon Kezic, the company’s head of strategy, who spoke highly of her “leading by example” and making sure that a wide range of individuals with varying levels of need and complex conditions receive the tailored support they deserve.

According to Simon, Lorraine’s emphasis on supporting people to live with dignity has played a major part in changing the lives of so many.

As an example, he quoted the case of a deaf resident who was persistently despondent and had limited communication with others at the home.

Lorraine therefore arranged for colleagues to have British Sign Learning training, and eight members of support team are now proficient.

“This has led to significant improvements for him. He more fluidly and openly communicates with the care team at Ty Hendy,” said Simon. “His behaviours have also been markedly reduced and he has expressed his gratitude for the kind gesture.”

She has encouraged one group to cook for themselves, which has improved their lifestyles through healthy eating and learning about nutritional values, with the result that two of them have lost a substantial amount of weight.

Following their recent visit to the home inspectors from the Care and Social Services Inspectorate commented on the “person-centred care” being delivered, with residents being treated with “respect, dignity and warmth”.

Lorraine, who lives with her partner and stepson, said she derived great satisfaction from helping people to develop their skills and was proud to think that her work was appreciated by those who had supported her nomination.

Outside of work she loves working off her excess energy through kickboxing and has been a member of The Way Gym in Cardiff for eight years.

“I find it more interesting than just attending a gym, and I have a purple belt, which is below brown and black,” she said.

She also enjoys football and supports Swansea City, though she hasn’t had much chance to watch them over the past year.

She was stunned  to hear her name being called as the winner of the gold award on what she described as “a really lovely evening”.

“I was just very happy to have been nominated and didn’t expect to win gold,” she said.