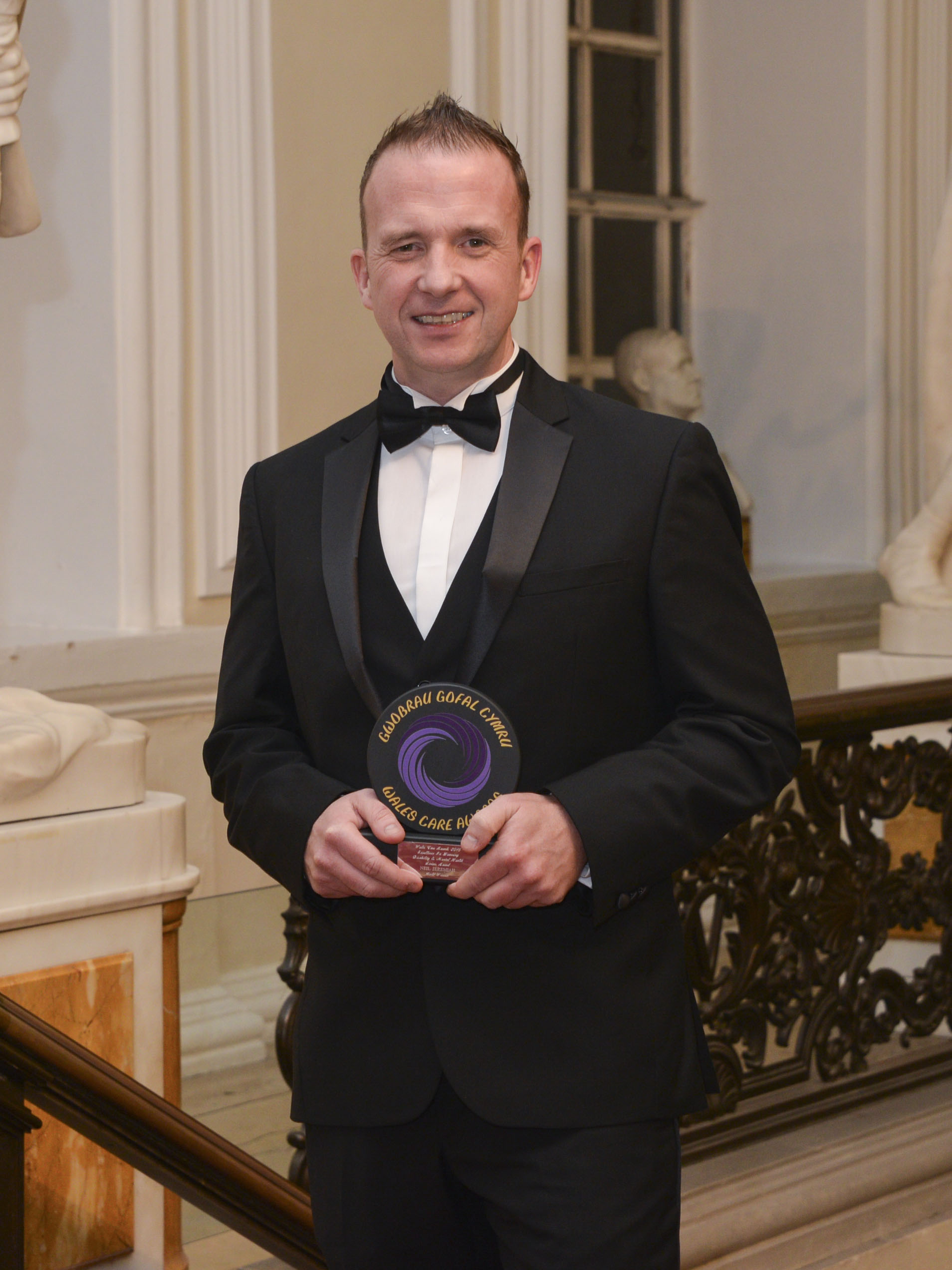 “I was lost for words and humbled by it all,” said Neil, 45, who has two children aged six and five.

“It was a great evening. The people who were nominated on the night were just a small representation of the good work going on in the care sector in Wales; there really are a lot of good people out there.

“I don’t think what I do is special in anyway. My colleagues and other managers do a fantastic job. I’m not going to get carried away with it but it’s nice to be appreciated and put forward.

“It makes me very proud to be a part of the care industry. I wouldn’t be able to do anything else and nights like this make it all worthwhile.”

The national awards, which are held annually, acknowledge the hard work and exceptional performances of those in the care sector.

Neil, who is team manager for Welsh division one rugby side Trebanos, previously served as a senior aircraftman in the Royal Airforce for nine years where he spray painted military aircraft.

He completed his initial RAF training at RAF Swinderby in Lincoln and was stationed at various RAF bases in Scotland and England as well as a six-month tour of the Falklands Islands in 1992.

He left the RAF at the age of 27 and applied for a job as a care worker where he remained for 12 months before joining Tracscare 15 years ago as a support worker.

“I was in the RAF, single and living in military accommodation and I just felt I needed to get out and find my own way in life and get a mortgage, like the majority of people do etc., so I came back to Swansea,” said the former Cwmtawe Community School pupil.

“I didn’t know what to do. I applied for lots of jobs – one was as a double glazing salesman. I lasted two weeks with that one, sales was certainly not for me.

“Then I saw an advert for care work with another firm and I went there for 12 months. It was meant to be. It was tough going initially but I stuck it out. I knew then that this was the profession for me.

“I went to work with Tracscare as a support worker and found it very rewarding working so closely with the people we support on a day-to-day basis. I discovered a passion for mental health and that’s when I progressed.”

Neil, who won a Tracscare company award in February this year, was promoted to his current role six years ago and is now a mentor to over 100 members of staff, supporting the manager of the services to assist them to understand the responsibilities they have to the people they support and how to deal with difficult and challenging situations.

One of the highlights of his career so far is formulating and implementing a recovery star model support plan into all our mental Health Services within the organization– an ‘outcomes’ based measurement tool recognised by the Department of Health allowing the people we support full involvement with set their own meaningful goals and tracking their progress through their recovery journey.

“We have lots of positive stories of people we have supported who’ve moved on out of our services onto have their own flat, we had a recent person who went on to get married and have children.

“I believe that everyone working in this industry can make a difference and impact positively on people’s lives.”

Neil was nominated for the award by Gemma Howells, Tracscare’s marketing manager.

She said: “Neil will always put the people he supports first, promoting equality and their rights before anything else. His passion and drive is clear to all. He wants everyone to understand the importance of supporting people with mental health needs on their personal and unique road to recovery.”